How She Really Got That Hot Body 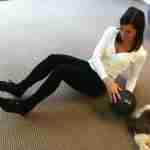 Anybody who reads my newsletter regularly knows that I really love what I do.

And if you have been reading every month, you know that I am all about being healthy from every possible angle.

But underneath the motivation to be healthy, many people really, actually, deep down, want to look their very best. They want to feel good, but deep down they also want to look good. And frankly, deep down, they wouldn’t actually mind it if they ended up looking absolutely drop-dead gorgeous.

But few people actually have the courage to take the action steps to look the way they dream about.

Part of what keeps me going every day is to listen to my clients’ success stories. Not a day goes by when somebody doesn’t tell me something wonderful that has happened as a result of our work together.

This morning, my first client of the day said to me, “I have to tell you this story because it is all about your work.”

Her boyfriend, a Harvard graduate who is currently in residency at Emory to become a medical doctor in a highly sought-after field, had told her he had once dated an 18-year-old professional New York model.

“You have a better body than she did,” he told her this past week.

My client is a single professional woman in her early 40s. Her boyfriend is 28.

A man can tell you that he feels you are a wonderful conversationalist, or that he appreciates your soul, but when he says he loves your body, you know that you really have his attention.

“What we do affects everything,” she told me. “It affects your professional life because it affects your confidence. When you feel this way, you spread positive energy, because, let’s face it, who wants to be around someone who is miserable?”

About two years ago, I was around a small group of women during the month of January. They had resolved they wanted to look better, and were affirming out loud, “I have a rocking hot body.”

I saw these people some months later, and they looked exactly the same.

You can’t just make affirmations if you want to look better. You actually have to take action.

So I thought some of you might be motivated to hear the story of my client.

She found a mentor she can work with long-term. My client has another friend who works out regularly. Her friend is also mid-40s and gorgeous, but her friend works out so hard she has ended up on crutches multiple times. Her friend has told my client that the trainers she works with have actually kicked her in the side when she wasn’t working hard enough.

Needless to say, I don’t believe in kicking anyone for any reason.

Once, on a recent occasion, my client decided to try another exercise class with a friend just for fun.

My client hurt her hip, her knee and her lower back in just one class. She and I then had to spend an entire exercise session to fix what she had injured in the class.

“Now you know what it is like to work out with someone who does not know what they are doing. Just because they are an exercise instructor does not mean they actually understand the body,” I said.

She worked with me to fix what was wrong. When she first started working with me in late February/early March of 2011, my client had been unable to work out for about 10 years due to a severe back injury. She had literally broken her back during a boating accident years ago. She had been knocked into the water unconscious and had literally broken vertebrae in her spine.

Before working with me, she felt deeply discouraged. She had trouble lifting her laundry basket or walking her dog.

We took the time to do therapeutic exercise for her back. I taught her what she could do on her own to feel better.

On a couple of occasions, due to severe stress, her back has bothered her again and she has come in for separate healing sessions.

Once she worked through the back pain, we could work out safely and regularly.

She brings her lunch to work. This morning, she told me she was bringing soup, a bag of carrots and two oranges. Before we worked out, she had made herself a frittata of eggs, goat cheese and sundried tomatoes. She had plenty of energy to do a great workout because she had eaten well beforehand, and she maintains good energy all day long because she eats fresh food throughout the day.

She drinks a huge bottle of water every day. I know this for a fact because she brings her water bottle to every workout.

She works out regularly, but not excessively. She and I lift weights together once a week. She is also a regular member of my evening yoga class and comes once or twice depending on her schedule. She also goes to Zumba class once a week, where I have advised her to do the exercises in a low-impact way, and walks her dog on the weekends.

She is consistent. My client maintains her exercise schedule no matter what. We worked out the weeks before and after Thanksgiving and before and after Christmas. We work out when she feels good and also when she doesn’t feel that great. We just modify what we do if she is not up to par.

That’s it. It’s not rocket science. Fresh food, lots of water and regular exercise. Above all, moderation and consistency with no excuses.

If you have the courage to put your deep desires into action, come see me.