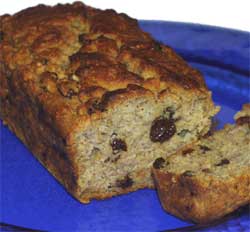 Get PDF for Recipe

In a large bowl mix together the flour, Xylitol, salt, baking powder, and baking soda. In a medium mixing bowl, beat the bananas until very smooth.
Add the eggs, lemon extract, and olive oil to bananas. Pour the liquids over the dry ingredients and stir until thoroughly mixed. Fold in blueberries.
Pour batter into two greased and floured loaf pans. Bake at 350 degrees for 1 hour and 20 minutes. Check the bread after 1 hour.

Notes from the cook, Sarah Harder:

I started baking wheat free/gluten free for my family because we are using a diet called Eat Right 4 Your Type. The recipe for the mix I use in baking does not contain some of the more common ingredients in gluten free mixes simply because I have overlaid this information with the blood type recommendation for types A and O, thus no potato starch or guar gum.

I have been experimenting with this formula for quite some time and the most effective mix seems to be equal parts of organic brown rice flour, organic soy flour, arrowroot flour/starch, and tapioca flour/starch. I have also added rice bran at times but that seems to make the mix more crumbly. I have not had much luck with cake so I avoid them. The compost bin was filling up so I’ve stopped experimenting.

My most successful recipes are for cookies. The most popular is the Nestle’s Toll House recipe found on the bag of chocolate chips. In most cookie recipes I substitute the above flour mix one for one for wheat flour. Since the mix contains soy flour the flavor is different from what you are used to with wheat. The color is also compromised since soy flour has a yellow cast. In fact, I’ve been putting in and taking out the soy flour since I’ve been baking wheat free due to conflicting articles on how good soy really is for us and the flavor difference in some recipes.

Another consideration at our altitude (Prescott, Arizona, the mile high city) is that you may have to add some extra flour to your batter. The best way to tell is to mix up your dough and then bake one test cookie to see how it reacts in the oven. If it’s a crepe when the time is up, add more flour to the rest of the batter and retest.

I was having mixed results making sweet breads until I found a recipe from a Bertolli olive oil magazine advertisement. It’s a recipe for zucchini bread but I used bananas instead. The resulting bread was much moister than ones I’ve made in the past using organic butter. (My husband laughs at me since I find recipes all the time that sound good to me. I just don’t have any of the ingredients so I substitute everything and come up with something new. In my own defense, some of the substitutions are driven by the diet restrictions on blood type.)

Since some folks are also asking for sugar free I have begun using Xylitol as a sweetener. (You can see where none of the ingredients in a recipe apply to what I’m baking!) Xylitol is a naturally occurring substance found in many fruits and vegetables. It has a sweet taste similar to sucrose, but has 33% fewer calories than an equivalent amount of sugar.

Xylitol can be substituted cup for cup in recipes to replace granulated sugar. Experimentation has shown me that Xylitol browns faster than sugar when baking. The baking results are similar to honey. Xylitol is a very expensive ingredient in baking. I was getting a better price on Amazon.com. but during Christmas the supply dried up for a while. There I’ve found it in bulk for $5.00 to $6.00 per pound.